Paving the Road to Crow’s Nest

On December 7,  2005, FAMPO (Fredericksburg Area Metropolitan Planning Organization)—the regional board that coordinates the area’s transportation planning—took a significant step towards literally paving the road to Crow’s Nest.  They approved the redirection of funds originally earmarked for projects that reduce automobile emissions to pay for a project whose stated purpose is to increase the amount of automobile traffic traveling to the Brooke VRE station.  The project is the second in a four-phase effort that would create a new road that dead-ends at ’s largest tract of undeveloped land: the Crow’s Nest peninsula. 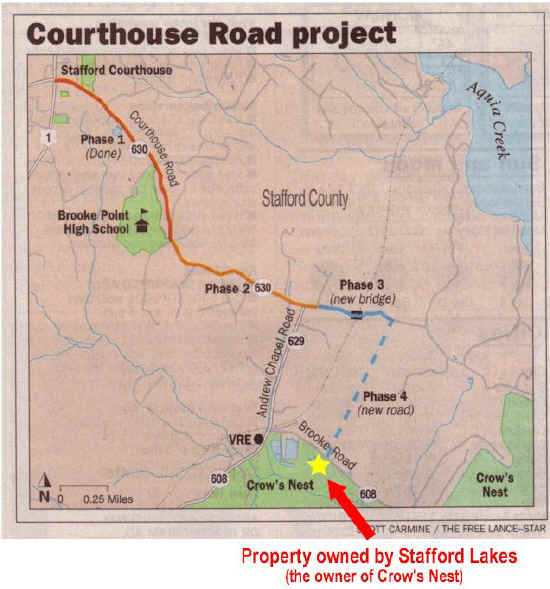 The 4-phase project plan includes building an entirely new road that dead-ends at ’s largest track of undeveloped land, Crow’s Nest.  That road would facilitate development and dramatically increase traffic in the area. (Map is from the Free Lance-Star, modified to show the property owned by Stafford Lakes LP.)

Redirecting Scarce Transportation Dollars
The region is a “non-attainment” area, meaning ozone levels exceed acceptable Federal standards.  The Federal government offers localities money to fund projects specifically aimed at reducing automobile emissions that are the major contributing factor to high ozone levels.  Typical projects include support for public transportation or bike paths.
FAMPO tried to use these funds to build the project, arguing it would increase ridership at the nearby commuter rail station.  However, that station is already operating at capacity (see parking data), with no plans or funds for expansion.  A government determination ruled that this intended use did not qualify under the program’s guidelines.  As a result FAMPO had to reclassify these funds to continue the project anyway.  That was the purpose of the December 7th vote.

The Road to Crow’s Nest
One answer to that question may be seen in the project’s later phases.  Phase III will replace a small bridge on Courthouse Road, allowing heavy trucks, including concrete trucks and other construction equipment, to travel to the area.  Phase IV would create an entirely new road that dead-ends precisely at ’s largest tract of undeveloped land: the Crow’s Nest peninsula. The presence of such a road would make development on Crow’s Nest and nearby properties much more feasible. The notice about this hearing sent to residents who live near the project made no mention of the upcoming third and fourth phases of the project.
Both the Aquia District’s outgoing Supervisor, Kandy Hilliard, and Supervisor-elect, Paul Milde, spoke in favor of the road expansion project.  However, most residents speaking at the public hearing opposed the idea, citing more pressing transportation needs in the region, the inappropriate use of funds, and the increased threat to Crow’s Nest.
The FAMPO board is made up of a combination of elected officials and staff.  Bob Hagan and Randy Wheeler from voted against the project.  Others, including Stafford Supervisors Bob Gibbons and Pete Fields, voted in favor.

You can read the local newspaper coverage of this event in a story that appeared before the hearing and in a follow-up story after the hearing.